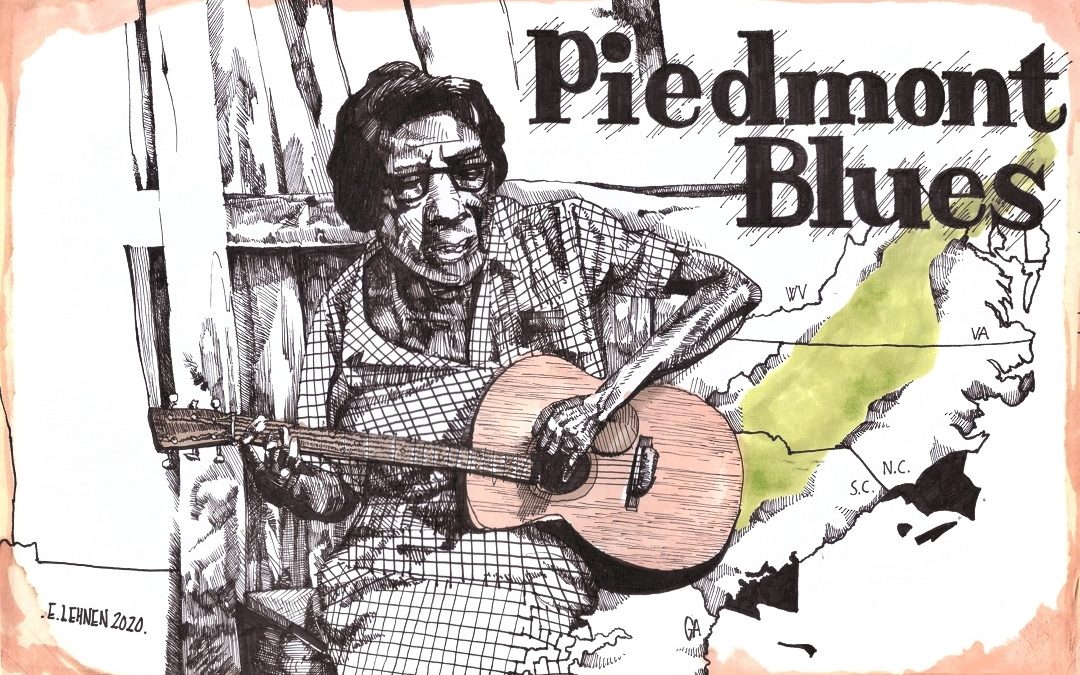 Thoughts Before Diving In

When we pulled this genre out of the jar, we were so excited it was the first. Writing it on the little piece of paper, we couldn’t stop saying “Piedmont blues” over and over, because it was fun to say and a beautiful, poetic phrase. We assumed it would just be a geographic region, and in some part it is, but we didn’t know it was Appalachia. Was it a region of the Delta similar to Hill Country? We guessed the Dakotas. Italy? We had no idea where Piedmont was.

After two weeks of admittedly casual research (because we are not Bruce Bastin or Alan Lomax), and listening to as many artists as we could find, we decided Piedmont blues might best be described by Pink Anderson’s apt comparison to Delta blues, taken from the liner notes of his album “Carolina Blues Man:”

A more technical description would point out the distinct finger picking style of these early “Carolina blues” men and women, and look to the “Piedmont roll” as displayed in the youtube video from Rev. Robert Jones:

Occasionally, we found the terms “Piedmont blues” and “Carolina Blues” being used interchangeably. The Piedmont region of the United States includes portions of several other states. “Carolina blues,” it seems, should be reserved for those artists whose work was restricted to that area.

Piedmont is a narrow, banana-shaped region in the eastern United States, curving from New York, down through Virginia and the Carolinas, across Georgia, and into Alabama. It is bordered by the Atlantic coastal region to the East and the Appalachian mountains to the West. This last fact is why Piedmont blues at its jauntiest will closely resemble bluegrass.

Developing around the mid-1920s, during the great migration of Black Americans to the northern states, Piedmont blues’ most obvious influence is Ragtime blues. It’s theorized that the Ragtime influence on Piedmont blues was due to the musicians’ proximity to larger cities in the region, where Ragtime was already popular. If not for the Appalachian mountains forming a natural barrier to the west, there possibly would have been more migration that direction, resulting in a more rural sound to this genre–like that of the country and Delta blues.

If you listen to enough Piedmont, however, you’ll quickly notice the inevitable overlap with the bluegrass sound of its western neighbor (e.g. Etta Baker’s “Jaybird March”). The Piedmont tempo is often quicker than other types of blues and it commonly includes a variety of bluegrass instruments, such as washboard, assorted percussion, fiddle, harmonica, and banjo. So, naturally, many of the pillars of the genre, such as Blind Boy Fuller and Etta Baker, also played banjo, which is picked with the thumb and index finger, same as Piedmont-style (OxfordAmerican.Org).

One source suggested that the Piedmont fingerpicking style may have been a carryover from West African kora players who were enslaved and brought to America. If you watch a kora player, the fingerpicking is done exclusively with the thumb and forefinger, same as Piedmont. But so is the banjo. The Piedmont style is probably due to all of this and forty other cultural micro-influences at that time. Regarding the influence of African instruments on American blues, Wikipedia explained it like this:

Some scholars and ethnomusicologists have speculated that the origins of the blues can be traced to the musical traditions of Africa, as retained by African-Americans during and after slavery. Even though the blues is a key component of American popular music, its rural, African-American origins are largely undocumented, and its stylistic links with African instrumental traditions are somewhat tenuous. One musical influence that can be traced back to African sources is that of the plantation work songs with their call-and-response format, and more especially the relatively free-form field-hollers of the later sharecroppers, which seem to have been directly responsible for the characteristic vocal style of the blues.

This family tree of blues will be revisited many times as we explore more varieties in the future.

The blues boasts myriad subgenres that bleed into each other, and many of the artists we studied would play many different styles of blues throughout their career. We became so familiar with Piedmont, we found ourselves straight-up disagreeing with a few of Wikipedia’s suggested artists. We pulled records from our stacks and played hours of their music, always asking: well, if it isn’t Piedmont, what is it? Is it country blues? Is it Delta? Is it Ragtime? Brownie McGhee, for example, was all of the above.

Like McGhee, several artists we’ve learned about oscillate between Piedmont and Delta blues. When trying to determine whether it was true Piedmont, it became a good metric to just ask each other: Can you dance to this? If the answer is no, chances are, it ain’t Piedmont. Aside from the distinct picking style, Piedmont, more often than not, has a tempo that you can dance to. It owes this to its predecessor, Ragtime, and its neighbor, Bluegrass. Both are styles which were developed to accompany dancing. Scope this video of Algia Mae Hinton and friends buck dancing on a porch:

This also sent us down a rabbit hole that taught us about the origins of clogging in the region and the evolution of modern tap. That’s someone else’s blog, though.

We also learned from our spins that songs, themselves, would be passed around like stories, and evolve with each artist adding their own signature. “John Henry” is a good example, and listen to the resemblance between Etta Baker’s “Railroad Bill” and Mississippi John Hurt’s “Ain’t No Tellin.’” So many of these songs share their bones with another being played around the same time and place, it can be difficult to learn just who deserves the earliest credit.

It seems like the popularity of this style of blues started to phase out around the end of WWII, as the electric guitar was introduced and new styles emerged. Although anyone, anytime, anywhere can play the Piedmont blues style, the real beating heart of it ends in the 1950s. We’ve listened to some modern interpretations, but even if it’s good, there is something to be said about the gritty recordings and the warm feeling of 78s and Folkways albums true to the era when Piedmont was most popular.

Piedmont feels like the water of blues. It runs hot and cold, gentle and heavy. It can tap on you with monotony or swirl around your head. People gather around it socially and it’s tranquil to listen to when you’re alone. It’s fluid–allowing a range of sounds, instruments, and rhythms. But it’s brittle at the same time. If you keep the same instruments and the same tempo, but alter your finger picking just slightly, you’re suddenly playing another blues.

Throughout our research we kept coming upon mentions of the Music Maker Foundation. This non-profit helps elderly Southern artists record and perform their music, and helps them with daily needs, from housing to healthcare. We were also noticing how many of these artists were disappearing into obscurity.  We are making a donation, and hope you will, too. As music obsessives and purveyors of records, we hope this music is preserved and the women and men with the talent to tell us stories through the blues are taken care of!

The following are some great examples of Piedmont Blues and are currently in stock.   Click on each image to see the album on our products page. 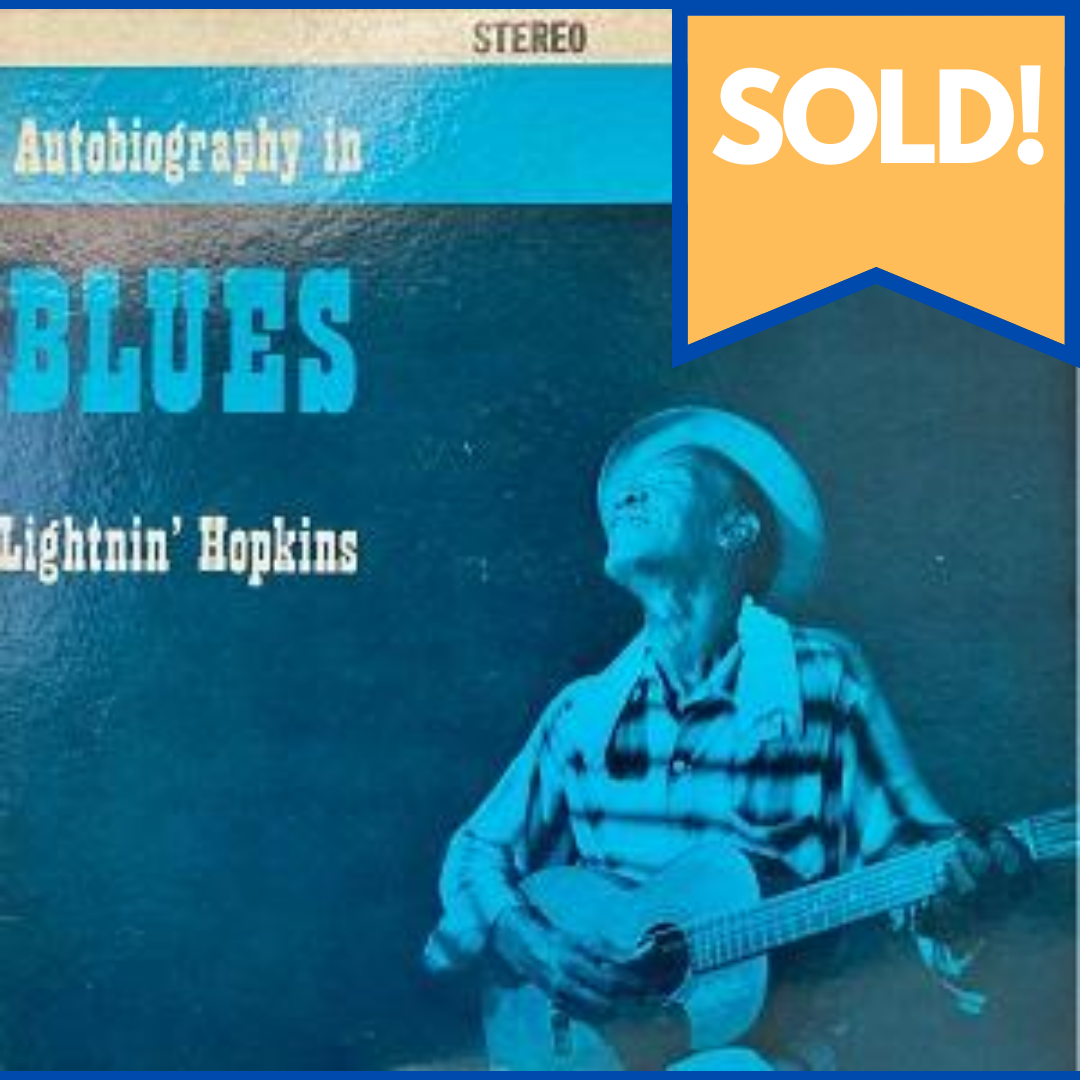 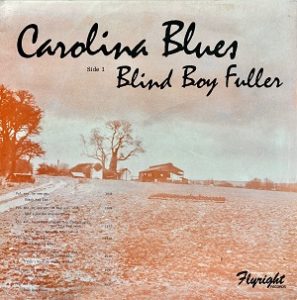 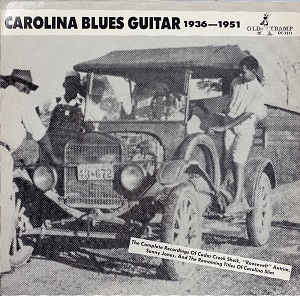 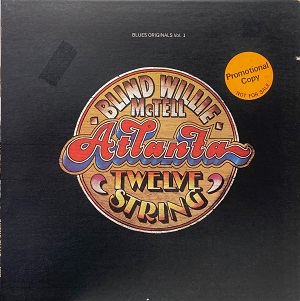 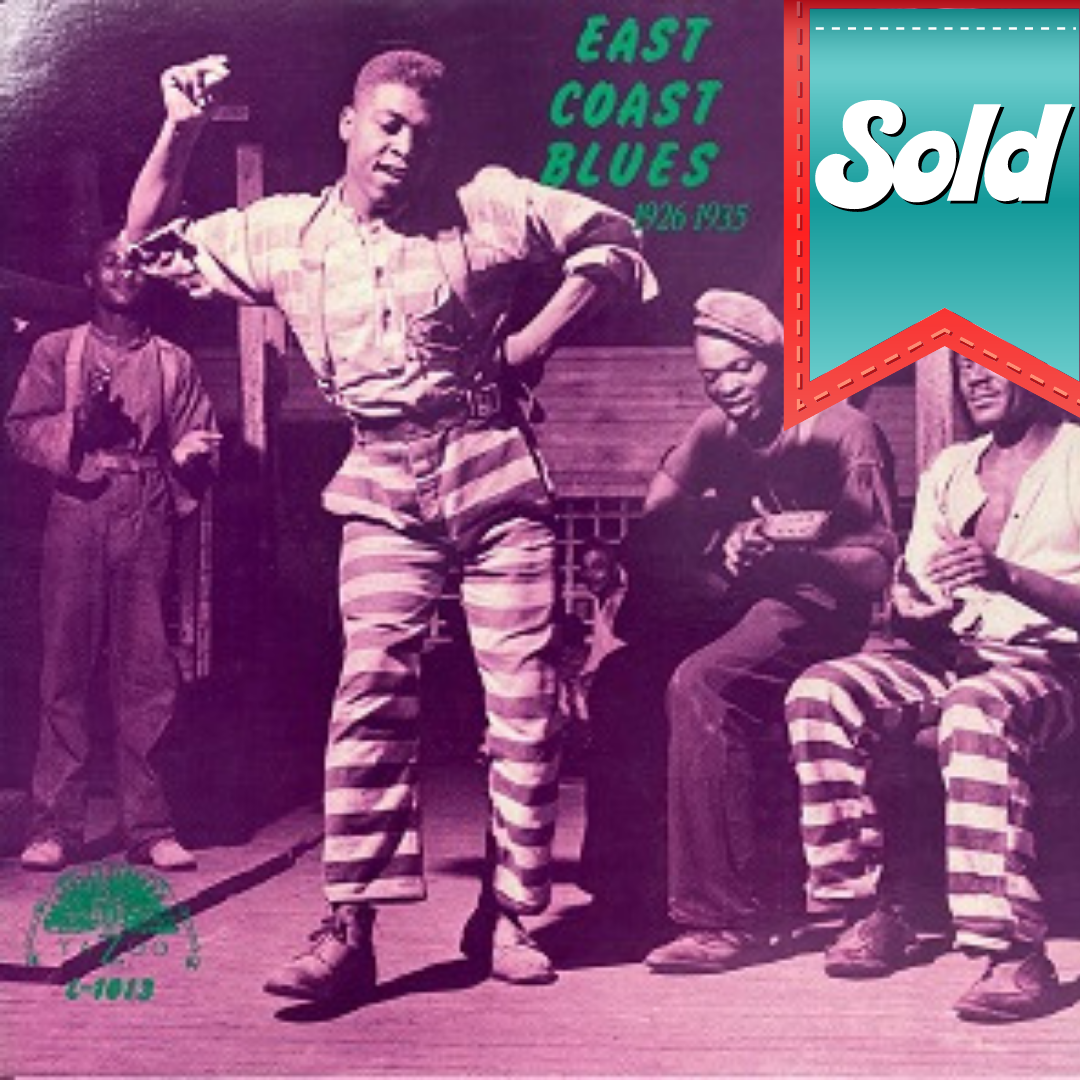 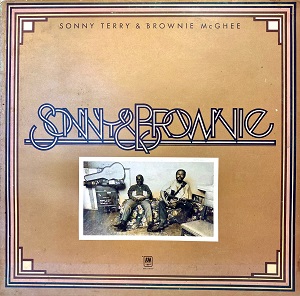 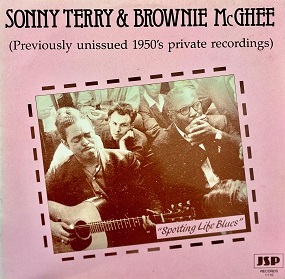 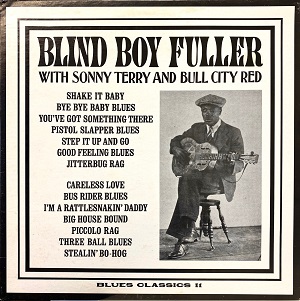 We also have the following albums listed on our Discogs page 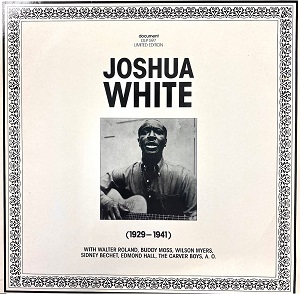 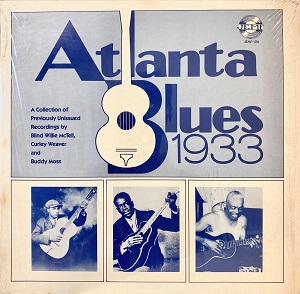 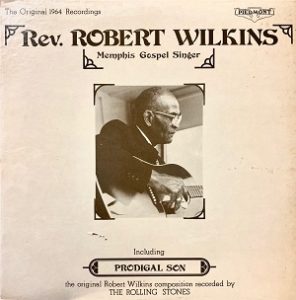 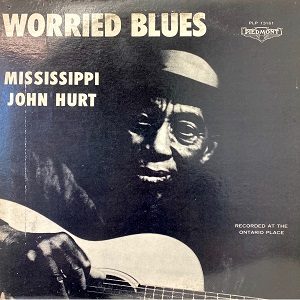 How do Stephe and Wade feel?

Little did I know the Piedmont blues have been an ever-present force throughout my life. Before this project, I had heard of the style while digging through Folkways and Alan Lomax’s archives, but never realized it is the picking style Arlo Guthrie used for a family favorite, “Alice’s Restaurant.” While doing some more digging, there are some definite gems to be found in the genre, including Rabbit Muse, Elizabeth Cotten, Etta Baker, Algia Mae Hinton, Cephas and Wiggins, Clayton Horsley, John Dee Holeman, and Turner Foddrell among so many others. This is the type of the music that makes you want to grab your favorite beverage, sit on the stoop or porch, and kick back.

A fingerpicking style rather than a sound, some songs sound more at home in an icehouse; others evoke a back porch on a humid day, looking out over some remote valley.  It turns out that some of my favorite musicians are either on the periphery or firmly within the genre. It also has overlap with subgenres I’m more familiar with, such as the Country Blues.  Mississippi John Hurt recorded some Piedmont, though in my mind, he’s strictly Delta.  Elizabeth Cotten is one of the genre’s pillars.  Modern devotees include the energetic Charlie Parr.  Listen to ‘Shake Sugaree’ by Cotten as a young woman.  Listen to ‘Freight Train’ by Cotten as an old woman.  Listen to ‘Oh Babe It Ain’t No Lie’ by her at any age; it’s always true.

We were definitely feeling the women of this genre. Elizabeth Cotten, Algia Mae Hinton, and Etta Baker had us tapping and swaying.  If we had to name an artist as quintessential Piedmont it would have to be Blind Boy Fuller or Pink Anderson; for us at least. Give our Piedmont Spotify list a listen for some of our favorites.

We rated this genre a 5.75 out of 10. Its fun and feels good, but doesn’t give us the feels like Delta does.  We could listen to “Shake Sugaree” all day though

Come back next time for:

Love that I am of the generation that was lucky en

In the mood for something truly brutal? This recor

Happy New Release Friday! Grab one of these bad bo

Album cover of the day! Please explain this one…

Some interesting items filtering in this morning a

Album cover of the day! This is what perfection lo

Happy New Release Friday! Grab one of these bad bo

This website uses cookies to improve your experience while you navigate through the website. Out of these cookies, the cookies that are categorized as necessary are stored on your browser as they are essential for the working of basic functionalities of the website. We also use third-party cookies that help us analyze and understand how you use this website. These cookies will be stored in your browser only with your consent. You also have the option to opt-out of these cookies. But opting out of some of these cookies may have an effect on your browsing experience.
Necessary Always Enabled
Necessary cookies are absolutely essential for the website to function properly. This category only includes cookies that ensures basic functionalities and security features of the website. These cookies do not store any personal information.
Non-necessary
Any cookies that may not be particularly necessary for the website to function and is used specifically to collect user personal data via analytics, ads, other embedded contents are termed as non-necessary cookies. It is mandatory to procure user consent prior to running these cookies on your website.
SAVE & ACCEPT